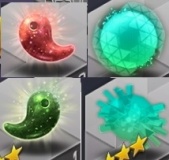 Are resources used to add Skill Points (SP) to a demon.

Are resources used to level up a skill on a demon.

Is the process of taking off a skill from a demon. (see in-game tutorial)

Are resources used to Harvest skills from demons.

Genomes obtained via summoning on skill gacha banners,harvesting gacha skills,as pvp tier rewards.These genomes can be used to transfer the skill it contains 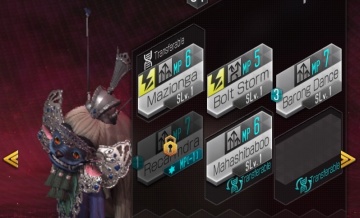 Transferable skills are indicated by a genome icone (here Mazionga and Mahashibaboo). The "blue" skill (Mahashibaboo) is the so-called "Gacha skill", it can be extracted using a Blank Genome without killing the holder

Skill transfer allows a demon to learn a skill from another demon, increasing its combat options and creating powerful combinations. To transfer a skill, the demon that receives the skill needs skill points, and you need another demon with the skill you want to transfer. Skill points are per-demon, and they are acquired by sacrificing other demons or special items (either demon's souls or Yasaka Magatamas) in Pandemonium, more precisely the possible sacrifices/fodders are:

Transferring skills can be done in two ways:

Skill points and transferred skills are lost when fusing. Skills are not lost when evolving, so feel free to power up! Once you have transferred a skill, you can replace it with another transferred skill using the same process. If you transfer the same skill again, the skill will level up and become more powerful!

NB: a skill can be leveled up by "transfering" a duplicate of itself, so everything above also applies to skill leveling (except for leveling unique skill which requires the use of Kasane Magatama).

When thinking about which skills should be transferred to a demon, consider these guidelines as a general rule for early-mid game:

Here are cheap and basic skills obtainable by fusing the corresponding demon:

Resist skills are used to cover up a weakness on a demon.

Almighty magic doesn't contain as much power as Elemental magic, but it ignores Makarakarn and the damage cannot be blocked.

Elemental Boosts are passive skills that drastically increase damage dealt of an element.

Magic that hits all targets can be situationally useful for 5 MP.

Healing is great for healing up your demons without having to waste items. Here's a list of skills commonly transferred for healing.

Resurrection is useful for when things don't go as planned.

Stat buff skills are powerful as they affect all allies.

Stat debuff skills are powerful as they affect all enemies.

Status ailments are best inflicted against all enemies for the best chance of getting at least a single target. Bind & Charm are the best status ailments to inflict.

If you ever ask yourself which 3 stars or 4 stars demons you can sell or which ones you should keep because of a rare Gacha skill they may have, simply look at the Sections below. This is a basic list of skills you may or may not want to keep.

For 5 stars demons, you don't want to use them as fodder (except fusion or panel fodders), yet they may possess rare Gacha skills. In this case you'd want to use a Blank Genome to extract the skill without killing the holder.

Remark : the lists are not exhaustive as new demons may be added where as the list may not be updated. But they provide a very good grasp on what are the good Gacha skills.

Gacha skills from 3★ demons are not worth using a Blank Genome on. However some may be worth keeping the demon in the storage as "skill transfer fodder". Here are these skills:

Rare skills with somewhat good effect (no indication on the demon carriers is given for skills carried by many many demons; please click on the skill for the full list of carrier demons)

Rare attacks of average power/usefulness, but good to stock up for leveling up the skill on a demon that has it innately

Skill already obtainable from fusing 4★ demons. But getting them as gacha skill can save you up to a few 100s K Magnetite

Gacha skills from 4★ demons are not worth using a Blank Genome on unless the demon itself is Gacha exclusive. But they can nonetheless be used as fodders.

Rare skills with excellent effects (no indication on the demon carriers is given for skills carried by many many demons; please click on the skill for the full list of carrier demons)

Skill already obtainable from fusing expensive 4★ demons. But getting them as gacha skill can save you up to 400 K Magnetites or more

Gacha skills from 5★ that are worth using a Blank Genome on.

Yasaka Magatamas, Blank Genomes and Kasane Magatamas are the 'resources' of skill transfer.

For Yasaka management, there is little to add aside from the what we explain in the Section 1.2. Skill points are only mildly difficult to get, and they get easier to obtain as you become an advanced player. 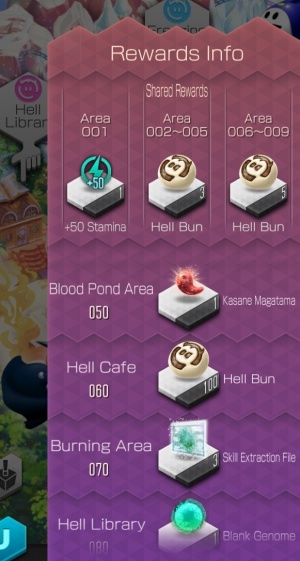 It is not a farmable item. You obtain it as reward, gifts or purchase:

In conclusion, Blank Genome is either very rare or expensive if you are willing to put gems in it. For a newbie it will also be very hard to get the Blank Genome from Hell Park because of how difficult the 8th Area is.

Please refer to the Sections above for the skills worth Genoming : only use a blank genome on 5 stars demons or non-fusable 4 stars demons.

It is not a farmable item. You obtain it as reward, gifts or purchase:

Kasane Magatama are more abundant than Blank Genome but you need much more of them (skills often need 5 level up to reach their max). Hell's Park Blood Pond is relatively easy to complete. As a Event reward, it is not very hard to get the Kasane as long as you make it your priority. And getting top 10% in Democalypse is midly hard, probably out of reach for newbies; you also need to join a Faction as this is a Faction event.

Considering skills typically need 5 level ups and newbies can get around 3 Kasane per month (5 for more advanced players), you don't want to waste them on any skills. Kasane Magatama should be reserved for "Unique Skills". Unique skills are indicated by the fact their Skill Point cost is " - ". Their level up boost is often much much better than other skills (they often get -1MP cost as their max level bonus). Except a few, all 5 Stars demons have an Unique Skill that can be leveled up.

However you do not want to level up all Unique Skills of all demons. You want to use Kasane on (listed by priority order):

For another uses of fodder demons: