Awakening uses Aether, a resource from Strange Signal, to unlock an extra skill on a target demon and slightly increase their stats. The skill available through Awakening depends on the target demon's Archetype (color).

Awakening a demon unlocks their Archetype Skill, which varies depending on the demon and its Archetype, and slightly increases their stats. 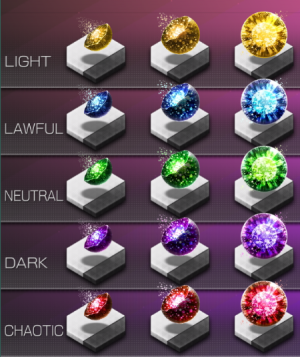 Strange Signal quests drop only one type of Aether, depending on the Signal chosen. The quality is random, but higher levels drop more of the larger sizes.

Strange Signal quest availability rotates based on the day, with Neutral being open all the time.

The type of aether needed will depend on a demon's race:

The amount of aether needed will depend on a demon's base rarity:

Most collaboration demons use special Aether only available during their event, and will not follow the aether pattern of their race.

Additionally, collaboration Aether only comes in S and L sizes, no M, and cannot be converted between sizes.

The following races are currently collab-only, and do not use normal Aether: