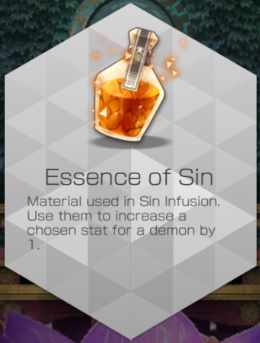 Sin Infusion is similar to Mitama Infusion, except that it's much simpler.

The maximum Infusions a Demon may receive depends on its grade:

Because 2★ and 5★ Demons are, generally, better and have the same maximum Sin Infusion limits as 1★ and 4★ Demons, respectively, the former would end up stronger than the latter after getting fully infused. The cut is not so clear regarding 3★ Demons (their limit is twice of 4★, but they are, usually, much weaker than them, mainly when it comes to Skills).

It's important to note how unbalanced is the cost per point increased. 1★ and 2★ Demons require just one Essence of Sin to increase any Stat, while 4★ require 12. Considering those costs, Infusing 5★ Demons is proportionally cheaper than 4★.

Anyway, because Essence of Sin is a very time consuming item to gather (there's no Auto Move to run the Tokyo Abyss automatically, and it only resets the rewards once per month), it's better to spend it only on the best Demons, and only on those that will actually be used.