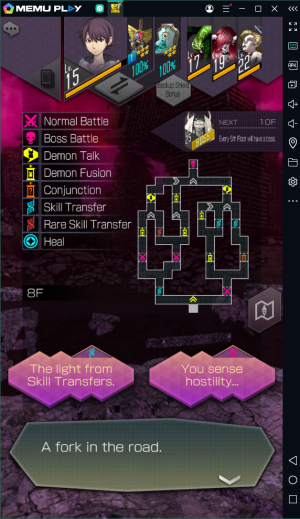 Tokyo Abyss is a quest area created in 2021, accessed through the Alter-World menu on the Map, as it's set on that story line. It's the main source of

The gameplay consists of reaching the deepest possible floor, starting at the 1st floor with both the player's character and one 1★ or 2★ Demon at Lv. 1.

The deepest floor the player can reach is recorded, and awards are given based on that.

There's no limit to how many times it may be played (there are no Action Points or Stamina depletion in the Tokyo Abyss).

The game is played solo, without access to any of the Demons the player has collected, so each run is almost like starting from the very beginning. The exception to this are the player's Armaments, which can be swapped out at any time by going back to the Entrance screen. Unlike other quests, a Tokyo Abyss run can be interrupted at any moment, and it doesn't block other quests, missions, or challenges from being played.

The Demons gathered through a Tokyo Abyss run are all of

Common Archetype, and won't be added to the player's collection. They cannot the Paneled or wear Brands, although Transferable Skills are offered during the run.

Tokyo Abyss is available every month (as of November 2021), with rewards resetting at the end of the month.

Magnetite depending on the deepest floor reached by the end of a month.

The player will receive Souls for the 3 demons who were last in their party at the end of a month.

The mode plays somewhat similar to an Aura Gate, in that it involves dungeon crawling. However, the mode is not a maze: a map is provided, so it's more of a series of forks in the road. The mode initially had a total of 60 floors, but it was later updated to have infinite floors.

The player has to choose Armaments to run the Tokyo Abyss, similar to other Alter-World areas.

For shields, there is the Backup Shield Bonus

The floors are composed of paths, which lead to a series of encounter rooms:

As of November 2021, the Tokyo Abyss is usually reset at the beginning of each month, so it can be played for rewards again.

Skills can only be transferred to Demons that don't already have them.

Forks in the Road

Every time a bifurcation is reached, the player has to choose to go left or right.

If/when the player character is killed, the player may choose to try the same battle again, without extra costs - or to go back to the 1F entrance, where the mode can be reset and started all over again, also without costs.

Teams are composed of the player's character, plus one to three Demons.

Both the player's character and its first chosen Demon start at Lv. 1, at the entrance of the 1st floor.

Demons and the player character gain experience through battles.