Welcome to the third issue of the Dx2 Digest! After the madness that was last week, things are looking a bit more chill this week.

All times and dates mentioned are in JPT.

The latest patch introduced a change to Random PVP: You now lose less points when losing a random match (roughly half from testing). This is an extremely welcome change that makes Random PVP less punishing, as a single win will offset multiple losses now.

Surt A had a huge impact upon launch, fitting very well in Moirai Sister teams and also Repel + Double Intimidating Stance teams. In return, players ran Ardha + Demiurge as a counter, as the pair would stop both Surt A and Atropos chains while providing hefty heals to keep the team healthy. Endure-type skills were also teched onto T1 teams to prevent them from being outright exploded by Surt A - examples include Elec Survivor on Anat and Fire Survivor on Uriel.

The changes to Random PVP + players randoming to test out Surt A comps leads to a massive overall point gain, with the amount of Legends quitupling from 16 to 86 players. Hopefully this trend sticks!

Everyone's favorite OP Purple Bug is getting a rerun!

Brief Description: 27,500 gems for a Guaranteed Angra Mainyu or Ardha at the end, if you perform the Tome Summon. It's a very pricey banner but fortunately you get to pick which to Tome.

Verdict: This is a very difficult banner to judge. On one hand, Angra Mainyu is the best demon in the game right now, with no other demon even coming close. Ardha isn't a bad pickup either, being strong counter for Moirai and Surt A comps (though he really needs Demiurge to shine). On the other hand, it's extremely expensive to tome. You will have to decide if 27,500 gems for the current best demon is worth it, especially with 3.5 Anniversary about 3 months away.

Most of the Dimensionals are pretty useful for PVP, consider rolling one of the banners if you want to shake up your PVP teams. Check Tier List for an idea of how they can be used.

There are four different type of banners this time, make sure you don't end up accidentally rolling the wrong one! An important note is there are no single-demon guarantees this time. This means you could theoretically roll an infinite times and never get a Surt A. If you are chasing a specific demon, you might want to reconsider. 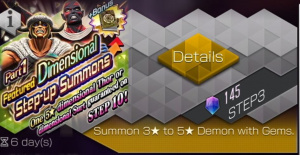 Brief Description: 9,000 gems for a Guaranteed Surt A or Thor A at the end, and bonus 100 Dimensional Tomes. Limited to one cycle.

Verdict: This is the best banner to roll if you are chasing after either of the new demons, as it's the only one with a guarantee at the end. 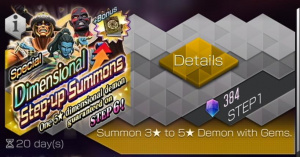 Brief Description: 5,500 gems for a Guaranteed Dimensional Demon, and bonus 60 Dimensional Tomes. Limited to one cycle.

Verdict: This is a good banner to roll for if your roster lacks Dimensionals (or simply for Dimensional panels). Note that this banner does not have boosted rates for Surt A and Thor A, all dimensionals share the same rate for this banner. 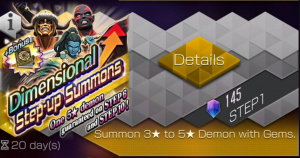 Verdict: This banner is purely for those who have exhausted all the other banners and need more Dimensional Tomes. You should stay far away from this one, though doing just the discounted step 1 isn't a bad idea.

Verdict: This is for those who have exhausted every single step-up available. Avoid this like 16 Scourges. 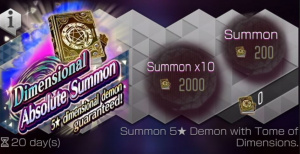 Verdict: Remember that Dimensional Tomes have no Expiry. Thor A and Surt A have 33% rates each, if you are chasing either of them consider cashing in your tomes here, otherwise you can save them for later when the Dimensional you want goes on rate up.

This banner is only available for 100 pulls, and contains the regular gem pool demons + several banner ones. The biggest draw for this banner is a doubled rate for 5★ demons (6%), though it is shared across the entire pool which is like 50+ demons at this point. As a bonus, you also get 2x Parchment Pieces per summon.

Verdict: This is a highly divisive banner. While you can potentially get a lot of 5★ demons from it due to the increased rate, the chances of getting good 5★ demons are rather low due to the large pool. Since there is no incentive to do a 10 pull (same rates regardless), you could treat this as a "scratch the gacha itch" banner and do YOLO 100 gems rolls whenever you feel the urge to.

200 parchments gets you one of the following demons.

Verdict: This is a great banner! These demons are either banner-only, Abs only or flat out unavailable elsewhere like Xi Wangmu, if you have saved up Parchment Pieces consider using them here!

There are four skill box summons available this time.

Verdict: The only source of Fire Survivor so far, though unlike the Elec variant this is a lot more niche, with Uriel probably being the best candidate, Quetzalcoatl A and Azazel might appreciate it as well. Luster Candy is amazing for Democalypse, while Fire Amp is always useful. Probably the best of the boxes to pull.

Verdict: Only pull if you are desperate for Dark Pierce Weak for OG Alice, or Ice Pierce Weak for Hresvelgr. The rest of the weak pierce skills are rather outdated nowadays.

Part 2 resumes on 2021/05/01 We are getting 10 summons each day for 10 days total! The free summons will also have Masakado A in the pool, so cross your fingers and hope you get lucky!!

AG SP returns, with a new reward introduced: A clear Selector! This allows you to pick one demon to summon in a Clear archetype, which should greatly help with multifusions, Kartikeya especially. Part 2 kicks off this week with Kasane Magatama as a ranking reward, so expect this week to be more contested.

Democalypse is OFF this week, though simulations will open early next week.

Surt A will no doubt be used in some fashion, as his Rakunda chain effect will help neutralize the Rakukaja that both the Horde and the Boss will cast.

Round three of Battle Tower begins this week!

This section attempts to analyze the Tower meta. All teams are assumed to be running full debilitating handicaps (+120%) and trying to clear all 3 side goals (+4500).