Welcome to the 6th issue of the Dx2 Digest! The event continues into its second week, with Dark Prana as the prize for Part 2. Also the return of the coveted Hallels banner with a surprise guarantee at the end!

All times and dates mentioned are in JPT.

Brief Description: 8,500 gems with either Ose Hallel or Flauros Hallel at the end, plus 100 bonus tomes.

Verdict: The Hallels are powerful demons and being able to get one of them for 8,500 is pretty amazing value. If you are fine with either of them, this is a pretty decent banner to roll for, especially with an increased amount of guaranteed 5s in the step-up.

However if you are chasing a specific Hallel, be aware that the Hallel Absolute summon is incredibly pricey due to the lack of bonus tome step-ups. It will cost you 26,500 gems to gather the 300 tomes for an Absolute Hallel summon, making it even more expensive than the initial debut.

A special commemoration event for Shin Megami Tensei IV! Three new demons are featured this time, offered at 0.33% each. There is also a bonus tome step-up and a one-time Absolute summon that guarantees each of them for a discounted 200 tomes. See the section below for more details! 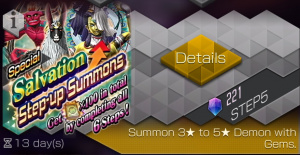 Verdict: This is the best banner to roll if you are chasing any of the new demons. You don't even need to finish it - stopping after Cycle 2 will give you enough Tomes to perform an Absolute Summon for whoever you want! This is pretty good value especially for Mahamayuri, who is currently the best Cleric for Battle Tower. 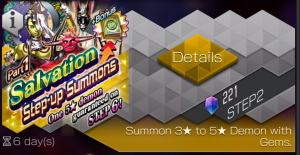 Verdict: This banner is for those who need more Salvation Tomes to tome more than one demon. Only roll this if you want to Tome a second demon (after finishing the Special one), though doing just the discounted step 1 isn't a bad idea.

Verdict: This is for those who have exhausted every single step-up available. Avoid this like 16 Scourges.

Verdict: 200 Tomes for a non-random guaranteed demon is incredible. It essentially means you can pick whichever you want if you invest 11,000 gems, though whether or not any of these demons are worth 11,000 gems is up to you. Also worth to note, Moirai sisters had the same discounted Absolute Summon on their debut, which never came back on their rerun, so it's not a long shot to say this might be the only chance to grab one of these for 200 Tomes.

Verdict: This is purely for those who have exhausted the Absolute summons and wish to gamble. Stay away from this unless you are whaling hard for P3 or something.

There are two new skill box summons available this time.

Verdict: The only source of Force Survivor so far. This is a great skill for Baal and Cu Chulainn A, as it ensures they won't be blown up by Surt A's Twilight Inferno. It's also very useful for Mahamayuri, who appreciates both the damage and the Endure. Auto-Tarunda is a generally useful skill, though it might be hard to find a slot for it nowadays.

Verdict: The only source of Dark Survivor so far. This is a great skill for Tzitzimitl if running the counter build against SurtA Sisters, or for your Dark nukers in general like Hecate and Lilith A who already have innate Dark Amp. Auto-Taruka is always useful to have especially for Democalypse.

These are preliminary observations, full writeup will be added to the Tier List after some testing this week.

A Ranked Collectathon this time, with two new skills offered for the Top 1000: Force Prana and Dark Prana.

Democalypse is ON this week, with Light as the bonus area!

This section attempts to analyze the Tower meta. All teams are assumed to be running full debilitating handicaps (+120%) and trying to clear all 3 side goals (+4500).