Hi folks! Another Parchment Banner for 3.5 Anniversary is now here!

This banner features several Gatcha/Banner-exclusive 5★ demons, while regular F2P 5★ demons are not pullable; basically, it's a banner where one can pull without the fear of having Red Barongs or Fafnirs hunting their dreams at night.

However, only five of the featured are actually in rate-up; they are: Atavaka, Demiurge, Hecate, Master Therion, Vairocana. With the exception of Therion, each one of them is an incredibly good demon, especially Demiurge! Those are also the demons that are summonable (randomly) through the banner's Special Absolute Summon, which uses regular Parchment Pieces.

This is a very good banner to pull in, especially if you aren't interested in the upcoming Koga Saburo Special Summon. So, consider checking it out!

This banner consists in 10 steps and 4 rounds; each step also gives 10 Parchment Pieces, for a total of 400 (100 per round). Each round, however, costs 8500 gems to be completed, requiring a total of 34000 gems in order to complete all of them, which is... pretty expensive, to say the least. Luckily, only two rounds are needed to perform a Special Absolute Summon!!! The costs and rewards for each step are the following: 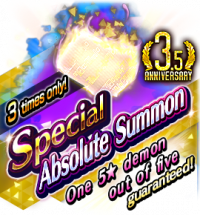 The banner's Special Absolute Summon allow to summon one of the 5 rated-up demons (Masakado, Alice A, Belial, Nebiros, Lilith A) at random for 200 Parchment Pieces, for a maximum of 3 summons for 600 Parchment Pieces. This means that, every 2 rounds completed, you are rewarded with a "free" Special Absolute Summon, with a maximum of 2 assuming all 4 rounds are completed. This also means that the third summon must be achieved by using Parchment Pieces obtained by other sources (previous Special Summons, missions, previous Events, conversion of other types of "parchments").

[Nothing]: The Demon is Gatcha-exclusive.

[]*: The Demon is normally only available from a specific banner.

[]°: The Clear version of the Demon is available through Multi-fusion, but the colored versions are Gatcha-exclusive.

[Bold]: The Demon is one of the five rated-up of the banner.