As far as roles go, by default you won't get much use out of Incubus. Marin Karin doesn't go very far with his support ai; but luckily, Mudoon, Zan, and Life Drain can be relatively useful in the early Story Quests - and beyond if your brands are good enough. This support niche can be filled with a transferable AoE Aliment skill, though at a higher MP cost than other, more useful demons with a similar build. Alternatively, much like Dis, Incubus can fill the role of a pretty powerful damage unit within an aliment team so long as he retains a Psychic (Purple) Archetype, thanks to Deadly Charm's 30% damage boost. But given his mostly evenly distributed stats, although on the lower end, Incubus can be built in a number of ways...

In terms of possible builds, Incubus has a little bit of versatility, though this is mostly due to his starting skill set: 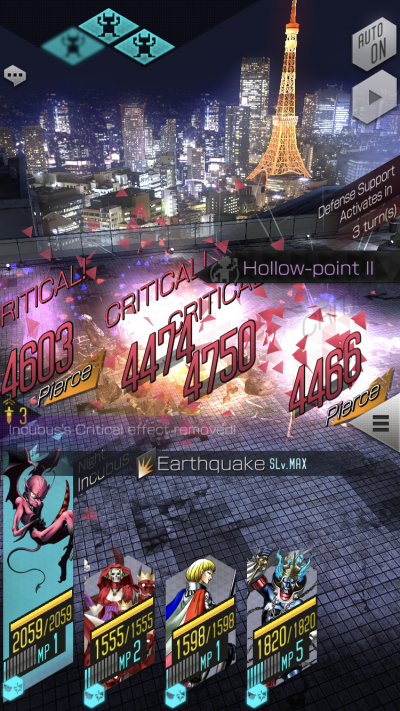 The damage a fully Sin/Mitama Infused/Transcended Incubus can deal with max bonuses/buffs and about 2130 P Def with Phys Amp, Butcher, and Deadly Charm (active against all enemies) against level 50s.

- Common Archetype - With the Common Archetype, it's generally best to give Incubus a Mag Atk focus. This build is best for using Incubus to deal relatively high damage by hitting enemy weak points wherever possible to use as little press turns as possible, though this build works best by filling Incubus's 2 open transferable slots with single target element skills (fire, Ice, Elec, and Light) to complement his starting Zan and Mudoon skills; with Life Drain filling the gap for scenarios where elements are not viable. This build can serve a similar function to an Aragami (Red) Gremlin, though with less utility, since Gremlin could cover all but 1 element type with his skill slots, and since Gremlin has a much higher Mag Stat.

- Psychic (Purple) Archetype - The Psychic Archetype is where Incubus's usefulness really shines - Gaining a 30% damage bonus against any enemies with the Charmed status. This allows incubus to hit relatively hard despite his low damage stats, and allows his transfer slots to be more properly utilized; in some cases, being able to out damage demons with a specific damage focus. This Incubus is best paired with a Charm based party, such as parties containing Mother Harlot, Maya, Succubus, or Lilith.

Phys Build - Due to Incubus's potentially high Agility and Luck stats (174 Agility and 161 Luck with Max Mitama, 234 Agility and 221 Luck with Sin as well) and relatively forgivable Strength and Vitality Stats (Over 200 each with Mitama/Sin), he can easily be geared towards a Physical build. With a set of Physical Defense brands, Incubus can also achieve 1700 (2000+ with Sin) or more Phys Def, much higher than he can possibly achieve with Phys Atk brands - this paired with Deadly Charm and 2 free slots means Incubus can easily achieve anywhere from a 45%-55% damage bonus while possessing Muscle Punch or Earthquake, which already makes his damage potential higher than most 1-3* demons with a Physical focus (Such as Grendel and Ares), while also possessing a naturally higher hit rate than most of those demons. Muscle Punch is preferred with this build, as Earthquake is a rather expensive investment to put onto a natural 2*.

Magic Build - Because of Incubus's preexisting skill set, magic is an option; however, magic is Incubus's lowest stat, so a focus on Mudoon and Zan is preferred if you're not building for Press Turn conservation. In this case, Damage boost passives for either/both can make him pretty useful all things considered.

Originating in European folklore, the Incubus is the male counterpart to the Succubus. It ravishes women in their dreams, impregnating them. The children between an Incubus and a human become demons or similar ilk.