Welcome! If you're here, that probably means you're looking for more information on how to get started, or you're keeping this bookmarked for its various resources. All of these are down below.

Dx2 Shin Megami Tensei Liberation is a turn-based JRPG with gacha elements developed by Sega for mobile devices. In this game you summon various deities and mythological creatures as demons of various rarities and use them to progress in the game by fighting other demons.

Your team is composed of a Liberator and four demons. The main objective of the game is creating different parties of powerful demons to complete all the game’s content, and since Dx2 Shin Megami Tensei Liberation has PvP (also where gems as a F2P comes from), you'll be motivated to build better demons and party compositions.

Dx2 is a complex game with many mechanics but the in-game tutorials will introduce you these concepts at a steady rate.

For some Terms, you can look at the Glossary.

Mistakes beginners must NOT do 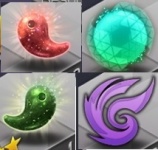 Below is a list of actions beginners should absolutely avoid doing. Not all the items of the list are inherently bad : a few may be viable for experimented players. However they should not be performed by beginners under any circumstances.

The Liberator is the party leader who boosts your demons’ abilities in unique ways. As you progress in the game you will unlock more Liberator.

Liberators level up and you can unlock different skills using skill points specific to Liberators. A max level Liberator will have enough skill points to unlock all of his or her skills (so you do not have to worry too much about which skills to unlock). Special Dx2 Quests must be completed to allow each Liberator to reach their max level. The different Liberators are:

You should build as many demons as you can to make use of different party setups for content. You can check the Tier List to know which demons are worth your time, but once you learn how to build demons, you can make almost anything work.

Below are the different ways to obtain new demons:

Whenever you’re in a battle in the Story Mode or in Aura Gate, there's a chance that one of the opposing demons will have a “Talk” bubble above their heads; this allows you to talk to them, where you'll negotiate, and if successful, they'll join your team!

The negotiation answers will usually be based on their personality, and it's easy to pick up with experience. At the end of almost every negotiation, the demon will ask for an item, so make sure it isn’t a rare item what you’re giving them. If you're in a negotiation with a rare demon, the best strategy is as follows:

Be sure to check the Demons and the Rates by pressing the i-Button on the top left of the banner!

Fusing demons will be your most used method of getting better demons. You just need two demons with at least one of them being a Common archetype and some Magnetite (another in-game currency) and you will be able to fuse a new demon. Many 5★ can be obtained through fusion.

You can use the Fusion Calculator @ https://oceanxdds.github.io/dx2_fusion/#en to know what demon combination will get you the demon you want. It is highly recommended to use it. If the site is in a language you cannot understand, locate the 'Setting' option and select your desired language.

Besides rarity, demons have grades, and that determines how they behave in fusion (as in what combination of demons you need to get another; higher grade demons fuse into high grades). Fusion of high grade demons are initially locked. You need to increase your player level to unlock them:

Fusing 4/5★ requires a lot of Magnetite, and Magnetite is a scarce resource so be careful with which 4/5★ you fuse as it’ll be a long-term investment.

There is no 'order' that things must be done with, you can do things in whatever order you'd like. However, it's recommended to complete content on the training missions at the home page because it provides freebies such as Macca, Magnetite, and Gems.

Also, make an Elementalist (Teal) Ose with the Elementalist (Teal) Setanta that you got in the Summoning Tutorial because that demon will carry you hard. There's multiple ways to do this @ https://oceanxdds.github.io/dx2_fusion/#en but the most common way is to:

The game can be divided into 3 parts: 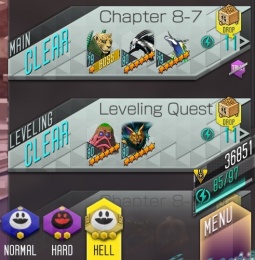 PvE contents grant EXP points. However in order to level up demons, the best way is to use "Leveling Quests". Every Story Chapter has a Leveling Quest. Leveling Quests not only let you bring two parties (e.g. two Liberators and 8 demons) to level them up, but will give you much more EXP than a regular quest.

To maximize the amount of EXP you get, bring your Main Character as the Liberator of one of the groups, as they have a passive skill to increase EXP. Bring a Kanbari demon in both parties (2★ demon that is fused in multi-fusion), as it has a skill to increase EXP gains too.

Brands are items that raise the stats of a demon and can be equipped in 5 slots: Head, Right Arm, Left Arm, Body, and Legs.

They come in 1~6★ rarities and with higher rarity, they contain more stats and upgrade potential.

When multiple of the same type are equipped, a set effect such as +50% HP can be also applied to a demon.

Duplicate sets can apply the effect multiple times on the same demon.

Brand stats matter more than the rarity, so make sure the stats are what you want before fully committing to upgrading it. You will quickly run out of Macca if you try to max upgrade every Brand.

Brands of Sin quests at Demon Buster is the easiest place to farm Brands, and they are available all of the time. The other option is Aura Gate past Floor 40+. Upgrading 3★ or higher Brands is called Advanced Enhancement.

Don't know which Brands to equip your demons with? Here are some example setups to help you get started (though these are just ideas, not 100% set in stone! Feel free to experiment):

Skill transfer allows a demon to learn a skill from another demon, increasing its combat options and creating powerful combinations. To transfer a skill, the demon that receives the skill needs skill points, and you need another demon with the skill you want to transfer. Skill points are per-demon, and they are acquired by sacrificing other demons and special items in Pandemonium. Possible sacrifices are:

Actually transferring skills requires a demon with the skill to be sacrificed, the donor. The donor may only transfer certain skills, marked with a DNA tag in their description. This is always the first skill, any skills received by transfer, and the bonus skill a Summoned demon receives. The UI shows you all skills that can be transferred to the particular demon, including skill point price, and will let you pick from demons in your stock that can provide that skills. Skill points and transferred skills are lost when fusing. The game will warn you if you are about to sacrifice a demon that qualifies. Skills are not lost when evolving, so feel free to power up! Once you have transferred a skill, you can replace it with another transferred skill using the same process. If you transfer the same skill again, the skill will level up and become more powerful!

A list of recommended transferable skills and their sources can be found here.

Awakening a demon unlocks their Archetype Skill (which varies depending on the demon and its archetype - that's the colour on the demon) and slightly increases their stats. Every demon requires Small, Medium, or Large Aether of specific type(s) to awaken them. You can also use Aether Crystals to instantaneously Awaken a demon, but don't use an Aether Crystal on 3★ or lower rarity demons! Even 4★ demons are relatively easy to awaken, so save them for 5★ if possible.

You should not fuse 3/4/5★s for evolve fodder. The recommended way to evolve is by using Yata Mirrors, base 2★s, or useless gacha 3★s to save Magnetite.

Evolving a demon increases level cap and slightly increased base stats as their rarity will increase.

Mirrors are limited, and natural 4★ and 5★ are too expensive to be used as evolution fodder. The solution to this is to use Kanbari as fodder.

Indeed, Kanbari provides experience bonuses, and as such will constantly be on your leveling teams meaning he will inevitably reach the level cap. In order to avoid wasting EXP on a level capped demon the solution is to evolve him: eventually, he will become a 5★, and then he can act as fodder for your best demons to evolve to 6★.

Now, how to evolve Kanbari to higher stars?

This does create the question of where additional Kanbaris will be sourced: the guide listed above on how to fuse Kanbari is a possible answer: simply run the aforementioned leveling quests while farming XP in order to get the demons needed for a Kanbari. The Compendium is an easier route: either directly summon Kanbari for 20 Karmas or summon the fusion ingredients you lack to get him. But Karma is limited, and getting more outside of events is slow and inefficient, so it should only be used when you're really feeling lazy.

So, in essence, Kanbari is the quintessential evolution fodder for 4★s and 5★s, and he becomes that fodder by gathering XP from leveling quests and using other Kanbaris as lower-rarity evolution fodder.

Useful Demons to Focus on

What you should focus on really depends on what demons you already have, but here is a list of Demons that are good for their Archetype:

There are numerous resources that you will acquire in this game that are not touched on during this brief overview of the game.

These include, but are not limited to:

The general rule is: Keep those, until you really need them.

For further in-depth reading about these topics, follow the Link after the bullet point.

This section is currently very outdated and needs to be updated.

There are several shops and several currencies to be aware of.

Gems are the main currency of the game and should only be used in the shop when you have a need for the particular item. Nothing from Pack 1 is necessary for playing the game, and only exists for convenience.

Macca becomes extremely valuable later in the game, so be careful with your spending.

Summoning is the main form of getting new demons and skills.

There are multiple forms of Summoning available at the summoning portal:

These are some extra reading you can catch up on, such as our Fusion Calculator, an in-depth Tier List, and more!